On the 21st of March, 1965, Innis students inaugurated the College’s first final exams by launching a paper airplane folded from the exam timetable. 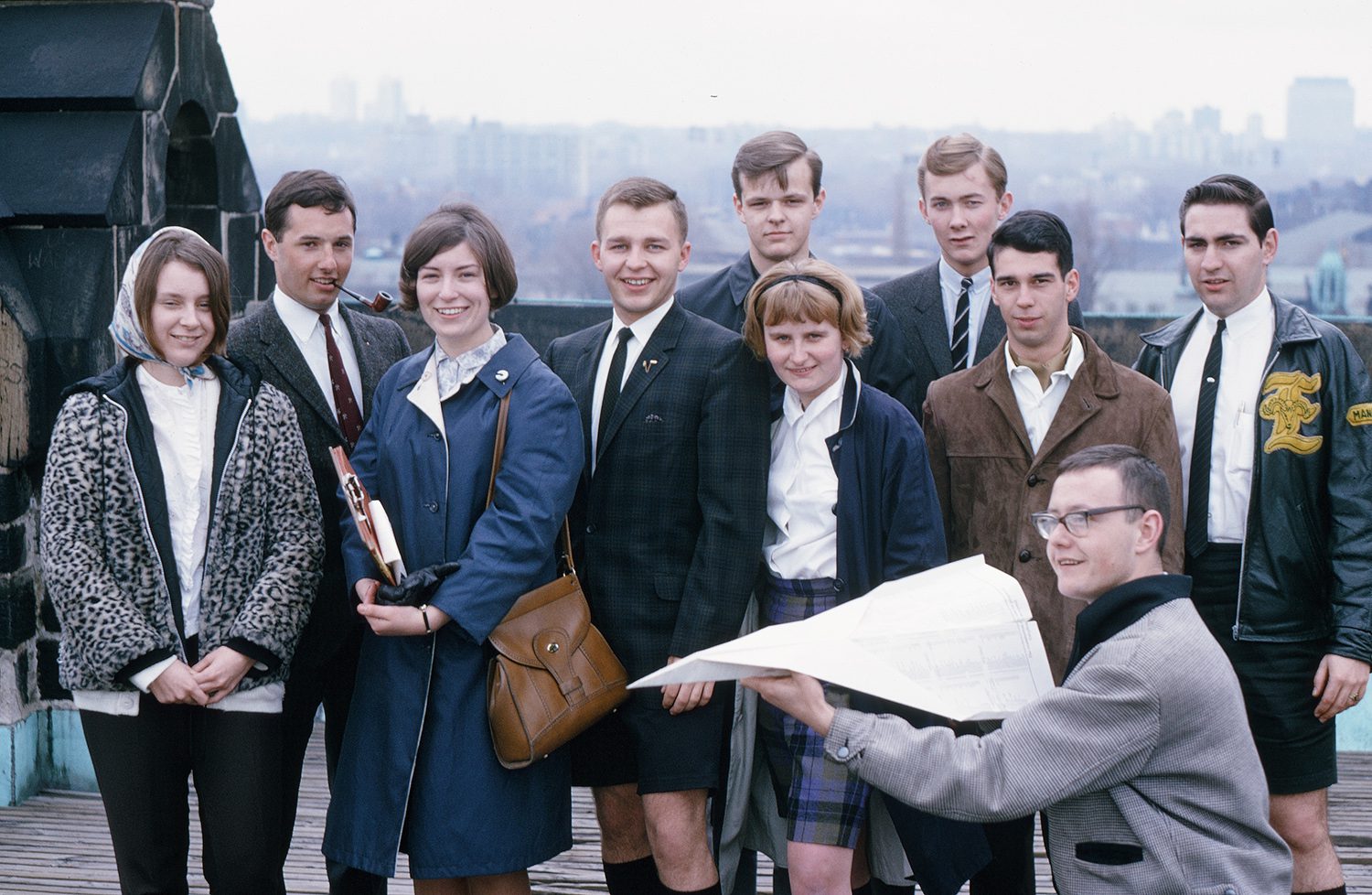 Robert Patrick, seen fourth from the left in the above photograph, explains, “at this time, the University would post the official exam timetable—with course names, sections, locations, and times—throughout the campus. Since this was the first time any Innis student would be writing a final exam, we thought it fitting to [literally] launch the timetable, calling it ‘Innis 1’.” 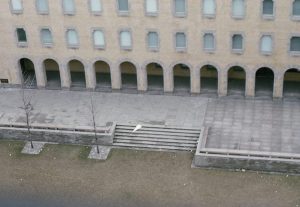 Innis College used to be located next to University College (UC), in a one-story building affectionately known as the “Biscuit Box.” The students gained access to the top of UC Tower to make the Innis 1 launch more ceremonious. From the tower, it flew into the UC Quad.

As Innis students prepared for their first-ever exams, they were aided by a local superstition. The University surrounded front campus with a snow fence, blocking snow drift and preventing anyone from walking across. Once the weather warmed, usually around mid-March, the fence was removed. According to Patrick, the superstition cautioned that “if you had not started to study for the finals before the snow fence was removed, you would fail!” 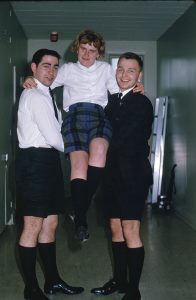 If you find yourself staring in bemusement at the student fashions captured in these photographs, you’re not alone. “As I recall that day was quite cold and I got many long, questioning looks as I rode the TTC buses and subways going to and from U of T,” Patrick says. With a low of negative 11 degrees Celsius and a high of negative four, the day of the timetable launch was freezing. The dress code for this event may appear somewhat unusual: shorts paired with knee-high socks and collared shirts. This is explained by their chosen launch date,  March 21. “A number of students decided to start a tradition of wearing shorts on the first day of spring,” Patrick explains. “I believe the ‘tradition’ lasted only one more year.”

Another accessory stands out. Second from the left in the top photo, John Bayly clenches a pipe between smiling teeth. This pipe was no anomaly. Professors and students at the time could be seen smoking pipes at various moments in what Patrick dubs a “pipe culture.”

Cristine Bayly, the late John Bayly’s partner, recounts that he enjoyed smoking a pipe because it made him “interesting.” At one point, he attempted to fashion a corncob pipe for the challenge. “He liked challenges,” Cristine Bayly recalls. As for the corncob pipe? “It wasn’t very successful.” 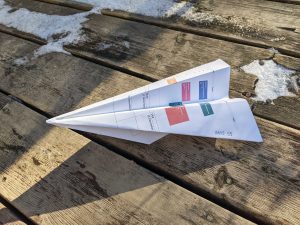 And as for Innis’s exam performance? Perhaps paper planes, short shorts, and snow fences weren’t quite enough. Under three quarters of Innisians passed that year—10 points below the Faculty average. But, despite these low scores, Innis students improved significantly in a short period of time. Within one year, these students succeeded in halving the College’s failure rate.

As another semester comes to a close, many students have been writing exams at their dining room tables or dorm room desks. After weeks of pre-recorded video lectures and online tutorials, this may feel normal, but it is certainly unprecedented. To bring a little tradition back into my life and to launch my first university exams, I folded my own schedule into a paper airplane and christened it the “Innis 55.”

The snow fence around the central field is something I have never encountered. Currently, there is a plywood barrier as campus construction continues. I will definitely need to start studying long before it is removed.

I have been finishing assignments and studying for my exams. Sometimes, I watch my lectures in pajamas. Since online school means no commute, I don’t have to worry what people on the TTC will think. I could even wear shorts on the first day of spring since there’s no need to go outside and leave the comforts of central heating.