Knowing how to write well is one of the most important life skills you can possess, not just for academic success, but for reaching your potential in your future career. The Innis Writing Centre can help you to improve your writing and editing skills, with free one-to-one instruction from experienced, supportive instructors.

When you finish your Writing Centre appointment(s), you’ll feel more confident about your writing and critical thinking skills. You’ll be ready to tackle your assignments knowing that you now have the tools to succeed. 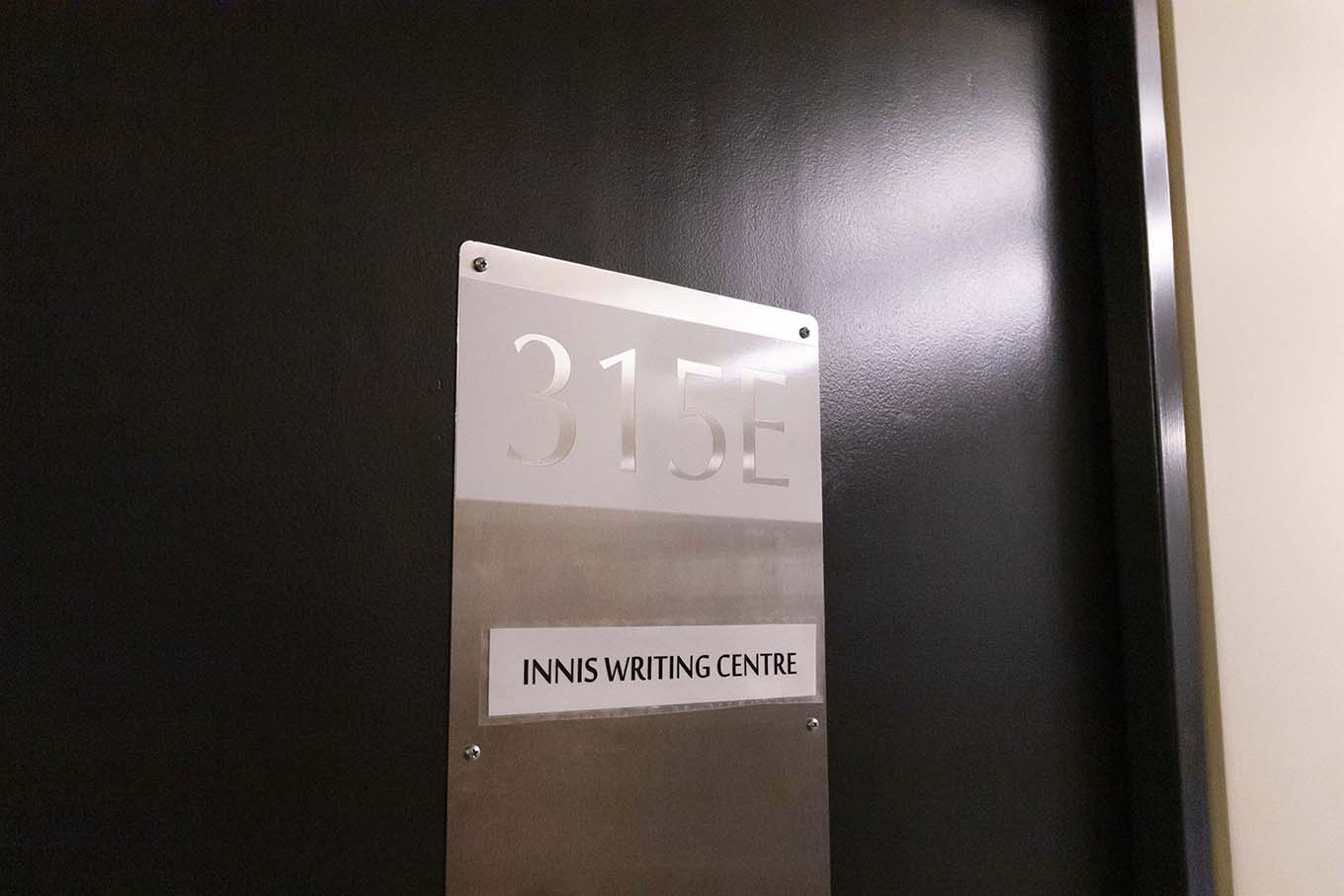 What can the Writing Centre do for me?

Who is eligible to use the Writing Centre?

What happens during an appointment?

What should I bring to my appointment?

We’re here to help you learn whatever you need to improve the writing in your assignments. Here’s what you need to know:

We’re here to help you learn whatever you need to improve the writing in your assignments. Here’s what you need to know:

How can Writing Centre instructors know how to help me with the content of my paper? What if I need help with ideas more than writing?

It’s actually an advantage to have to explain ideas clearly to someone who is not an expert in your field of study. The Writing Centre instructors are all generalists with many years’ experience teaching different forms of writing and working with undergraduates on assignments in all possible fields.

The writing instructor can help you brainstorm and generate further questions about your subject. He or she can also point out places in a draft where something seems to be missing, whether it is background information, evidence, or a logical step in an argument.

What if I'm getting good grades? Can the Writing Centre still help me?

Absolutely. We help students of all levels. We’ll adjust the level of instruction upward as you progress and as you undertake more advanced assignments. Even if you often get an A on assignments, you may find it helpful to consult us during the planning and writing process and get feedback on finished drafts. Or you may simply wish to learn a little more about finer points of style.

Who are the instructors?

All our instructors are experienced writers, editors, and teachers. They’re passionate about helping students to become better communicators! You’ll be assigned one of the following based on schedules and availability.

Cynthia is the director of the Innis Writing Centre. She also teaches in Innis’s Writing & Rhetoric Program (W&R), for which she was director from its launch in 2003 until 2016. Cynthia has developed courses on a range of subjects for W&R, including rhetorical analysis, writing for the professional workplace, ekphrasis, essay writing, and foundations of written discourse. Her curriculum development reflects her interest in visual rhetoric, fine art, and the decorative arts. Cynthia has brought to the Writing Centre and the Writing and Rhetoric Program extensive experience as a writing instructor in a wide array of settings, including colleges, universities, and the professional workplace. In 2002, she was awarded the Queen’s Golden Jubilee Medal for her work as a writing consultant in the office of Ontario’s Lieutenant Governor (The Honourable Hilary Weston). Publications include refereed articles on Canadian poetry in journals such as Canadian Literature and Journal of Canadian Studies; essays and shorter entries in reference texts such as the Oxford Companion to Canadian Literature, Blackwell’s Companion to Twentieth-Century Poetry, and the Encyclopedia of Literature in Canada; and numerous reviews in scholarly journals.

Over the last two decades, Cynthia served in positions of increasing responsibility at the University of Toronto’s Faculty Association (UTFA). From 2012 to 2015, she was UTFA’s chief negotiator in two sets of mediated talks with university administration that saw landmark policy changes — including professorial title and three ranks — for the teaching stream. Cynthia was UTFA’s vice-president – grievances for seven years before she was twice elected UTFA president (two terms, 2016-2020). She was one of the architects and founders of the University Pension Plan (UPP), launched on July 1, 2021. Cynthia was recognized for this achievement in Ontario’s postsecondary sector with an OCUFA Service Award, along with UPP colleagues from the University of Guelph and Queen’s University. Cynthia served as the last chair of the University of Toronto Pension Plan, before it transitioned to the UPP in 2021. Cynthia currently serves as UTFA’s representative on the UPP’s Employee Sponsor Committee and as Chair of the the UTFA Pension Committee.

Lazarus received a BA in philosophy and English literature from McGill University, and an MA in philosophy from U of T. After completing his MA, Lazarus studied publishing at Ryerson University, and has since worked as a copy editor for a variety of book and magazine publishers in Toronto. Lazarus also works as a writing instructor at the University College Writing Centre.

Cellan holds a master’s degree in second language education from OISE, U of T, and a BA in English literature from York University. She has taught writing and grammar courses to international graduate students at U of T’s Graduate Centre for Academic Communication as well as to newcomer professionals at U of T’s School of Continuing Studies. Cellan also works as a freelance writer and editor. She has written website content, educational and settlement materials, and funding proposals, and currently edits academic work by international academics for publication in English-language journals. Cellan has been the recipient of numerous arts grants for her poetry, which has been published widely in Canadian journals including Event, Grain, Prism International, The Malahat Review, and The Fiddlehead. Cellan has been working at the Innis College Writing Centre since 2012.

Patti Luedecke
Patti received her PhD from the Department of English and Writing Studies at Western University in 2019. Her research focuses on 19th-century American literature and her most recent essays appear in Studies in American Naturalism and the Edith Wharton Review. As both an assistant and lead writing instructor at Huron University College’s writing centre, Patti has enjoyed working with student writers across the disciplines and she welcomes working on projects in any academic field.
Mandy Pipher

Mandy holds a master’s degree in English language from the University of Oxford, and a BA in English, anthropology, and political science from U of T. She has worked as an editor, writer, and tutor for the past 12 years, including a position as a writing instructor at the U of T’s Graduate Centre for Academic Communication. Her op-eds appear regularly in the Toronto Star, and her research and writing have appeared in peer-reviewed health-care journals.

Jaclyn is an educator, poet, medievalist, and long-time writing instructor and learning strategist. She received her MA in creative writing and English literature from the City College of New York, and an MA and doctorate in medieval studies and Jewish studies from the Centre for Medieval Studies and the Centre for Jewish Studies, University of Toronto. Her scholarly interests are in language, literature, translation, and the written word. The author of a poetry collection, To Suture What Frays (Kelsay 2017), and three poetry chapbooks, most recently the corpus undone in the blizzard (Espresso 2019, Jaclyn has also been published in numerous anthologies and literary journals. Jaclyn is the recipient of a New York Times Fellowship for Creative Writing, and the Alice M. Sellers Award from the Academy of American Poets.

Vikki received her PhD in English from U of T in 2004. She is currently a lecturer at U of T for the Department of English, where she specializes in Canadian literature. Since 2009 she has also taught courses on academic writing and analytical reasoning for the Writing and Rhetoric Program at Innis College. Vikki furthered her experience as a writing instructor by teaching composition courses in the Department of English, both Effective Writing and Critical Writing about Narrative. She has published peer-reviewed scholarly essays on Canadian and American literature. In 2013, she was the recipient of the Arts and Science Student Union’s Ranjini (Rini) Ghosh Excellence in Teaching Award.

Rebecca received her BA in English literature from Western University, and an MA from Queen’s University. She has worked as an editor for over 20 years. As well as instructing at the Innis and University College writing centres, Becky teaches editing in Innis’s Writing & Rhetoric Program and Ryerson University’s publishing program, where she enjoys helping both students and professional writers to improve their language skills. She has specialized in editing fiction, literary nonfiction, language arts textbooks, ESL resources, and in many other subject areas.

The Innis Writing Centre is open for in-person and online appointments. All appointments are made through this booking system.

Please use Chrome to book your appointment. If the link does not work, then try clearing your cache (browsing data) in Chrome.

You may book up to one appointment per week — and up to three in advance. Additional appointments are possible through the drop-in online booking feature.

You may work on the same paper over more than one appointment. Instructors retain the right to limit the number of appointments you have on a given assignment.

The Writing Centre offers limited appointments at the start of each semester, then opens daily starting in October, and February during the fall/winter sessions. We are also open in the spring and summer.

If you have to cancel, please do so at least one day (24 hours) before your appointment through the online booking system.

Sessions are in high demand; often, we have a waiting list. If you miss two appointments (without cancelling), you’ll be barred from making further appointments for the remainder of the academic term.

Improve your GPA with free Writing Plus Workshops

From “Essay Writing From Start to Finish” to “Exam Prep Essentials,” U of T’s Writing Plus Workshops and research and writing seminars offer a series of academic skills workshops open to any U of T student. Take one, or take them all—they’re free and there’s no need to pre-register.

Everything you need to know about accessing resources on writing at U of T. Find great  advice from students and teachers, grammar guides, writing for specific disciplines,  how not to plagiarize, and even a description of all writing courses at U of T.

Writing at U of T

English Language Development (ELD) at U of T Scarborough has numerous useful resources, including an Academic English Health Check to help you identify your strengths and weaknesses in speaking and writing English. You’ll also find workshops and other interactive resources to practice your English-language skills.